Our Client was managing a busy fast-food restaurant. Two vehicles 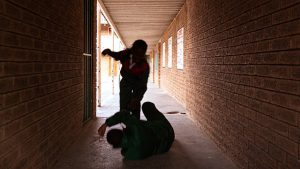 entered the drive thru side by side honking their horns into the intercom. Our client then made a comment in relation to the car honking.

The two men exited their vehicles and entered the store where they harassed our client and his employees.

Our client had asked them to leave to which they refused. Our client called the police. While speaking to police, our client had noticed one of the men having an argument with a customer. Our client intervened standing in between both men and grabbing the unruly person and dragged them off the premises.

Our client was then shoved by one of the men and pushes were exchanged. Shortly after the two men returned to their vehicles and appeared to be leaving. Our client wanted to assist police by obtaining both of vehicles registration details.

In response to this, one of the men hit our client in the face and hit the phone out of his hand. Our client responded by punching him in the face and a fight ensued with others getting involved to de-escalate the situation. Shortly after police arrived on scene.

Our client was charged with the offence of Affray contrary to Section 93C of the Crimes Act 1900.

The maximum penalty for this offence is 10 years imprisonment.

Mr Mansour diligently prepared for the matter and it proceeded to a Defended Hearing at Bankstown Local Court.

On the day of the Hearing Mr Mansour successfully convinced the prosecution to withdraw the charge!

As a result, the Magistrate dismissed the charge.

Our client was thankful to Mr Mansour for his dedicated work.