NO CONVICTION – Client charged with Affray after nightclub brawl! 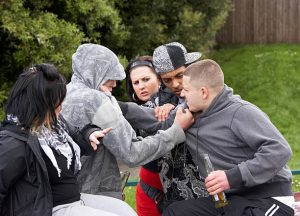 Our client attempted to calm the patron down, however this did not defuse the situation as the patron continued to swear and act aggressively.

At this stage a large fight erupts between two groups of men including our client. The two groups begin grabbing, punching and kicking each other with people being hit and falling to the floor.

Security guards intervene and separate all parties momentarily before the patron which instigated the situation charges directly towards our client and punches him cleanly in the head. This action leads to the fight recommencing between the males.

Meanwhile a member of our clients group is escorted outside by Security staff. Once outside some of the opposing group members also exit the venue and re-engage in a fight upon the footpath. This resulted in our clients group member to fall to the group unconscious and unresponsive. Whilst on the ground he is continued to be assaulted. Our client witnessed his friend on the ground attacked and ran towards the group.

Shortly after people involved in the fight flee the scene before police arrive. Our client remained with his unconscious friend and spoke with police about the incident.

Police arrested and charged our client with the following:  Affray under Section 93c(1) of the Crimes Act 1900 The maximum penalty for this offence is 10 years imprisonment.

Mr Khatiz appeared for our Client at Downing Centre Local Court where he made strong submissions to the Magistrate to not impose a jail sentence against our client. In light of Mr Khatiz’s submissions, the Magistrate only imposed a conviction and fine. However, Mr Khatiz believed that our client should not have a conviction impact his career and future. Mr Khatiz appealed the matter to Sydney District Court.

Mr Khatiz made compelling arguments to the Judge not impose a conviction against our client. The Judge ultimately agreed and imposed a Conditional Release Order, which is a good behaviour bond without a conviction.

Our client was extremely happy about the result because he not only avoided jail but also a conviction on his criminal history which could have drastically impacted his future prospects of employment.