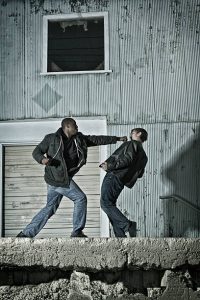 Our client has heard and seen the commotion taking place and decided to intervene to defuse the situation. The fight continued. Suddenly one of the men grabbed a large machete with a 40cm blade. Our client continued to exchange words with the neighbour before removing his shirt.

Our client and the neighbour then began to fight once more; reigning punches at each other and hitting each other’s faces.

Nearby residents witnessed the incident taking place and contacted the Police.

Police arrived and another resident provided Police with footage of the incident they had recorded using their mobile phone. The footage depicted our client and the neighbour viciously fighting.

Subsequently, Police arrested and Charged our client with Affray under Section 93c(1) of the Crimes Act 1900. The maximum penalty for this offence is 10 years imprisonment!

Our client had previously been charged with the same offence and the Criminal Lawyers Parramatta Team for Oxford Lawyers had handled his matter, netting him a Non conviction Section 10 order. Still our client understood the severity of the offence and was anxious about the prospect of facing imprisonment.

Mr Khatiz appeared at Mount Druitt Local Court and made outstanding submissions to the Magistrate. The Magistrate was persuaded by Mr Khatiz and imposed another Section 10 good behaviour bond without a conviction!

This meant that the Charge of Affray was not placed on our client’s criminal history! Our client was grateful to Mr Khatiz and the team at Oxford Lawyers for the stellar result.