Assaulting Police and Wife while on ICE – NO CRIMINAL CHARGE

Over the course of multiple days, our client had been reported to have induced a large number of drugs including Methamphetamines. As a result our client had avoided coming home to his premises where his wife and children reside at.

Our client is alleged to have returned home some days later while still under the influence of drugs and suffering from the effects of a drug induced psychosis.

Upon entering the home, our client was in a fit of rage and began throwing a number of items around the premises.

Our clients wife began to fear for her and the childrens safety and has sought the assistance of one of their neighbours. 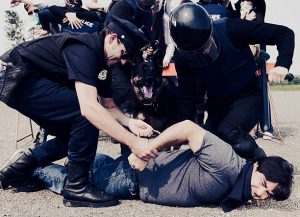 Our client began to accuse the neighbour of having an affair with his wife. Our client once again began to scream and grabbed a glass of water and poured it over her head.

Our client has grabbed his wife and the neighbour by the back of their necks and forced both to fall onto the bed of the room.

Our client then grabbed the neighbour by the arm and dragged him into the bathroom, pushed him in the shower and turned the water on, completely soaking him.

Police were called to defuse the situation. Whilst police spoke with our client, he became irate, pacing and yelling towards police. Our client then began to approach police and swing punches at them.

Police drew and armed a taser and directed our client to sit down. Instead our client began to wrestle with police. Police attempted to taser our client twice to no avail.

Police eventually were able to gain control and place our client in handcuffs. While doing so our client started biting the hand of an officer.

The following day our client was conveyed to Day Street Police Station where he was arrested and charged with the following:

Good Behaviour Bond for Client – Collision with Vehicle while on DrugsClient Granted Second Section 10 – No Conviction for Affray!